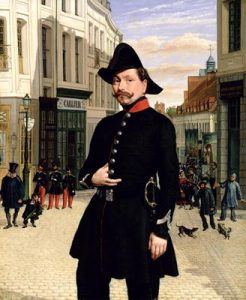 MURRAY ELLISON–Urban crime was an area of acute interest in the nineteenth century in America and Europe because the public feared that it was rampant and out of the control of the police. To respond to this concern, Poe demonstrates increasingly complex aspects of ratiocination in each of his three Auguste C. Dupin detective-based tales. He chose Paris, France for these tales because it had one of the first professional police forces. See photo of a French police officer above (myartprints.co.uk).

The term, ratiocination, is not listed in most dictionaries; however, it may be defined by deconstructing its syllables and associating it with other related words. A ratio compares the relationships between two quantities. Poe develops a new system for establishing relationships between unknown events and the motives or solutions to complex problems. Dupin expands the use of accepted nineteenth-century classical investigation techniques and adds hyper-observation and intuitive leaps of imagination to arrive at new solutions. He understands that clues and events are not always understood simply by the way that they appear. He approaches crime solving in the same way as he solves puzzles. With the same understanding of the evidence that the police hold, he provides new metaphoric solutions. His methods of unraveling crimes are unorthodox and appear to the police as irrational. Dupin presents the details of these cases directly or through an unnamed narrator to give readers a glimpse into his ratiocinative thinking. The narrator’s job is to be amazed at and inform the reader about the skills of the detective. Dupin separates the relevant from the irrelevant. He focuses on unexplained deviations from the normal, anticipates the actions and thoughts of his associates and opponents, and embraces information that, at first, appears to be external to the case. Each Dupin story is a self-contained armchair mystery, in that he seldom needs to leave his home to solve the crime.

Matthew Pearl, in his “Introduction” to the Dupin Mysteries, notes that Poe introduced Detective C. Auguste Dupin, of Paris, France to literature more than five years before Boston had established the country’s first professional police department. As a result, Poe chose Paris to be the setting of all three of his Dupin mysteries. Perhaps, he also made this choice because many French scientists and philosophers epitomized Poe’s criticisms of these intellectual ideas of the nineteenth-century Age of Reason. They rejected dogma and sought ways to find objective knowledge. They believed that truth could be best be verified by observation and scientific investigation. Among the ideas that Poe attacked in his detective stories was the irrational belief that man could ultimately attain near stages of perfection, and that he could control his environment by scientific methods. Because of these contradictory views, it is hard to determine if Poe proposed ratiocination to address crime, or if he was mocking the irrational faith that the Age of Reason thinkers had in science. Perhaps he may also have been “duping” his readers by presenting both possibilities simultaneously.

As a non-professional detective, Dupin mocks the inferior crime-solving techniques of the paid Parisian police officials. The prefect appears in each of the Dupin stories and serves as a symbol of the incompetence of police officials. A “prefect” is the French representative of a department or Region. In 1800, Napoleon reorganized the Paris police to fall under the jurisdictions of the Prefecture of Police for security. The Paris police, right after Boston’s department, became one of the earliest professional police departments in the modern western world. The prefect thinks he has the perfect solution to the crime. However, Dupin is always skeptical of his approach and solutions.

In his three tales of ratiocination, Poe demonstrates that Dupin’s methods of scientific reasoning are superior to those of the police. He is critical of the established authorities and power structures. The police are symbols for his criticisms of the professional scientists and the nineteenth century. He believes that scientists are limited in arriving at new solutions in the same ways that the police are limited in solving crimes. Poe’s crime-solving detective is officially titled Chevalier, Auguste Dupin. Chevalier is the rank equivalent to a master detective in France. “Auguste” means the most revered, and Dupin may be associated with the English verb “to dupe.” Thus, his name and title have ambiguous meanings. These stories then can be interpreted that Dupin is the most revered trickster to criminals; he is questioning the public’s irrational beliefs that scientists can solve modern complex crimes. The next Poe and Science column, I will discuss Poe’s first, and perhaps best-known tale of ratiocination, The Murders of the Rue Morgue.

*This article is an extract from Murray Ellison M.A Thesis on Poe and 19th-Century Science from Virginia Commonwealth University, 2015©