Nineteenth-Century Gothic Literature has often used themes of women held back or locked up in rooms and attics while attempting to make valiant stands and statements in support of their rights to artistic and intellectual expression, and social equality. These ideas are thoroughly supported and explored in Sandra Gilbert and Susan Gubar’s book, The Madwoman in the Attic (Yale University P, 1979), as well as in many other literary discussions of fictional works written during this period. Mary Shelly’s, Frankenstein, was one of the first examples in literature expressing this theme. In 1818, she published her first book anonymously because she believed that society would not accept the idea that women could be important authors. It was widely assumed that her husband, Percy Bysshe Shelly, wrote the novel. It was first published under the real author’s name in 1823. In the novel, Viktor Frankenstein creates a monster in his laboratory but has no control over the terror it unleashes in the surrounding villages. In one interpretation of Frankenstein, the monster was the author’s representation of how society was threatened by the idea of a successful women writer. 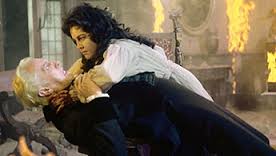 Madeline Kills Her Brother in “The Fall of the House of Usher: Photo credit by Horrortalk.com

Edgar Allan Poe’s 1829 short story, “The Fall of the House of Usher,” takes Frankenstein to the next level. Roderick Usher keeps his sister Madeline confined to a dark room upstairs where he reports that she is suffering from a strange mental illness. The sister’s name strongly suggests to readers that she is mad about something. The brother paints and plays music to his pleasure but the sister is not permitted to have the same privileges of self-expression. The brother is certain that restraining his sister in her best interest .The brother, who is afraid of sunlight and nature, won’t go outside the house and won’t allow his sister to go out or have any meaningful interaction or dialogue with the unnamed narrator, a friend who visits the house. During his stay as a house guest, the visitor views Madeline roaming through the house as if she is a ghostly spirit. In one way of looking at Madeline, her mental illness could be caused by her forced confinement and by being restricted artistically and socially by her brother. As Madeline’s madness gets more and more out of control, Roderick attempts to bury his sister while she is still alive, believing this is necessary to save her soul. Poe’s unnamed narrator graphically describes her terrifying screams and the rumblings of the House of Usher. As Madeline escapes from her premature burial, she kills her brother in an act of defiant anger and revenge. The narrator flees, saving his life as the ancient house crumbles to the ground. It can be argued that this story supports the view that Poe was sympathetic to the cause of lifting the artistic limitations imposed by society on women.

In Jane Eyre, the narrator as a ten-year-old orphan girl is taken in, but not loved by the Reed family. She is denied the right to read a book by her teenage cousin. When she questions him about this denial, he punishes her by throwing the hard bound book at her and bloodied her head. When Aunt Reed, her caretaker, hears the commotion, she takes her son’s side and admonishes Jane for talking back to her son. When Jane, also questions her Aunt for always siding with her son and for not caring about her, she is locked upstairs in the Red Room. That room was last used as the dying setting for Jane’s uncle and Aunt Reed’s husband. The aunt justifies locking Jane up because she believes she is mad. However, Jane’s uncle’s dying wish, which Aunt Reed had said she would agree to, was that Jane would be adopted and loved in the Reed household. The uncle’s wish is never granted because the Aunt never loves or accepts her niece as part of her family. Instead, she and her children give Jane steady doses of cruelty and neglect. As if the spirit and anger of the dead are being channeled through her uncle, Jane becomes outraged by her confinement and maltreatment. In an uncontrollable fit, she informs her aunt that the spirits of the dead are planning to seek revenge on her for breaking her promise to her dying husband. The Aunt banishes Jane from her home, disowns her, and sends her to an orphan school for girls (see earlier Litchatte.com discussion). After Jane matures to a young woman, she is summoned by Aunt Reed to her deathbed. Although she informs her Aunt that she has forgiven her, Mrs. Reed dies in anger, saying she has never forgiven Jane for her impertinence.

However, the most important question and tension of the Jane Eyre novel is: Who is the woman being confined in the attic in Master Rochester’s House? Jane is first hired by Rochester as a governess to instruct his “charge.” During Jane’s employment at Thornfield, a mysterious woman, living in the attic, roams the house at night to look in on, and frighten Jane, and later to try to set Mr. Rochester’s room on fire and kill him. As the story develops, Rochester is willing to break through socio-economic and caste restrictions and marry Jane. But, before the wedding vows are exchanged, Mr. Mason, the brother of the mysterious women in the attic, reveals that there can’t be a marriage that day because Rochester is already married to that woman— his sister Bertha. Rochester tries to justify his deception by explaining that his wife appeared sane when they were first married in Jamaica, but gradually deteriorated when Rochester brought her back to England. After she had started going mad, he explains that he confined her to an attic room and hired a servant, Grace Poole, to be her caretaker. He then takes the clergymAN, wedding witnesses, and Jane up to the attic to see the madwoman. As soon as Bertha sees her husband, she tries to attack him violently. Her behavior and the descriptions by the narrator seem to support the idea that she is a mad woman. However, there are questions about whether Bertha has always been mad or whether she has become mad because she couldn’t be controlled by her husband. These unresolvable mysteries become even clearer after Rochester explains how Bertha defied his expectations and seemed so different from him after their marriage. However, readers are only told that Bertha is mad by Mr. Rochester and, perhaps, we are not entirely convinced that he is a reliable narrator. We are never able to hear Bertha’s point of view about why she has become so angry and vindictive. Could she have been justified to reacting so strongly against such confinement and for losing her rights as a wife? We may think back to Jane’s anger about her involuntary confinement in the Red Room and for wishing to stand up for her rights of intellectual pursuits and free expression. If we can accept the idea that Jane was falsely accused of being mad, perhaps, we can also consider Bertha’s point of view. Bertha had just as much reason to be angry and vindictive toward her husband as Jane had toward Aunt Reed. Since Rochester could not marry Jane while Bertha was still alive, he proposes that Jane overlook society’s requirement of marriage and become his mistress. She rejects this suggestion because it goes against her moral compass (see first Litchatte, Jane Eyre discussion) and because she is concerned that she might end up as another  victim in Rochester’s attic.

In Charlotte Perkins Gilman’s 1892 short story, “The Yellow Wallpaper,” the female narrator, like Bertha Mason and Madeline Usher in Poe’s story, is confined to stay in an upstairs room, because her husband is a medical doctor,  and believes she is suffering from a temporary mental disorder. She, instead, is convinced that she needs to write to relieve her anxieties. However, her husband rejects such thinking. He prescribes a treatment of complete rest for her. As a doctor, he thinks he is prescribing the most proper treatment for her. But she is confused by the conflicting roles he plays between being a medical authority and a caring husband; consequently, she attempts to obey him. The woman, not having any other creative task to occupy her mind, identifies with the crawling woman. She perceives that the women she perceives is trying to escape from the restrictions of being confined in the wallpaper and of not being allowed to express herself. Her confinement causes her to become obsessed with what seems to be a woman living and moving about in patterns of the yellow wallpaper. In her mind, the patterns of the wallpaper and the woman she sees soothe her, and free her from the feeling of confinement. But when her husband returns from work, he observes his wife crawling madly around the room and trying to peel the wallpaper off. No doubt, he considers his wife as incurable at that point. However, she rebels against him, locks the door, and refuses to leave the room. Nineteenth-century readers often interpreted these stories of women going insane as unhealthy representations of their reactions against the expectations of society. However, many modern readers understand them as demonstrating that women, in that era, were just beginning their struggle for the freedom of artistic and intellectual expression.

Murray Ellison received a Master’s in Education at Temple University (1973), a Master’s of Arts in English Literature at VCU (2015), and a Doctorate in Education at Virginia Tech in 1987. He is married and has three adult employed daughters. He retired as the Virginia Director of Community Corrections for the Department of Correctional Education in 2009. He is the founder and chief editor of the literary blog, www.LitChatte.com. He is an editor for the “Correctional Education Magazine,” and editing a book of poetry, soon to be published written by Indian mystic, Shambhuvasanda. He also serves as a board member, volunteer tour guide, poetry judge, and all-around helper at the Edgar Allan Poe Museum in Richmond Virginia. He will be teaching literature classes at the Osher Program at the University of Richmond in the beginning of 2017.  You can write to Murray here or at ellisonms2@vcu.edu